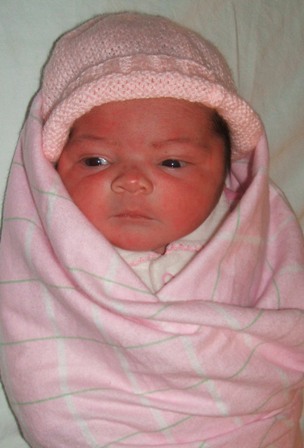 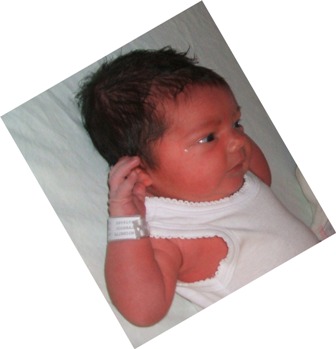 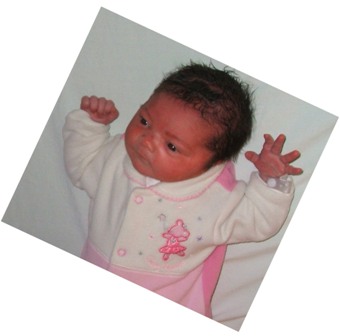 Appawantwy there are a wot more pics of me if you wook at the
fowwowing pages.
Make sure you check out ALL the pages....
Gurgle Gurgle.

....But wead bewow for my stowy and interwesting facts about me....

Kerrigan La-Brooy's daughter, Tempest Gypsy Paige La-Brooy was born at
11.25am on March 19th 2010 and the family were back in the privacy of their
own home by 5.30 that same day.

Wife Michelle went into labour around 6am after a very uncomfortable night.
Immediately Kerrigan rang the midwife and by 7am the couple were at the
hospital.

Kerrigan Jr. had turned 2 just 10 days earlier and Heathcliff was not yet 1
and already a Big Brother - He turned 1 on March 23rd. Had Tempest arrived just
10 days earlier Mr. & Mrs. Kerrigan La-Brooy would have had 3 children under
the age of two.

Tempest weighed in at 9 pounds - the biggest baby so far. She was 3 days early but
not early enough fot her ecstatic Dadda & Mumma. After months of saying her name
in secret amongst themselves the couple were finally able to reveal their baby girls
full name. She went under the alias 'Rani' for a long time as a joke among the family

Grandma Jeune hurried to the hospital to see her 14th Grandchild. Aunty Aprille was
home with the 2 boys despite having guests from interstate staying with her. Kerrigan
had spoken to the hospital staff expressing his concern that he didn't like leaving
his 2 sons at home without them for too long and that he also didn't want to leave his
wife Michelle and their daughter alone at the hospital either. So the couple were assured
that if there were no complications they would only be required to stay the minimum 6
hours before being able to go home. Thank God everything was normal and smoothe.

From the day Tempest was born family and friends came home to see the child. What was
really interesting was the intrigue on the faces of Kerrigan Jr. & Heathcliff. They were
already Dadda's boys and real possessive of Kerrigan - usually when one child was playing
with him the other would drag him off to get his Dadda's full attention. With the arrival of
Tempest things went up to a whole new level. Needless to say from the moment she was born
she was Dadda's little girl and had him wrapped around her little finger.

Kerrigan is quick to emphasise that his life is wrapped around his family and that his
world revolves around them. With over 12 bottles to feed and 14 nappy changes everyday
the happy Dad and Hubby never complains and considers it a Blessing and thanks the Lord above.
Michelle is full of praises for her handsome man and was immediately able to go back to
uninterrupted nights sleep and late morning sleep in's while Kerrigan took care of the
children.

Meanwhile Kerrigan adores his beautiful wife and says she's amazing and never complains
no matter howmany kids she has. She had barely got home after childbirth and she was busy
preparing dinner for Heathcliff's 1st birthday party the next day and she also baked a cake.

Kerrigan and Michelle are already talking about their 4th....
Keep returning for regular updates.