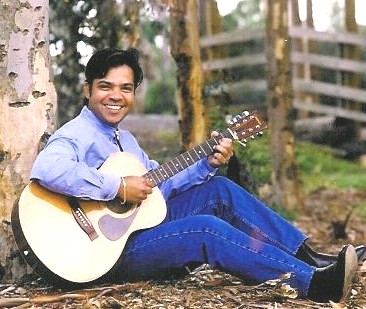 Kerrigan Warren Rayne is an Australian dream come true.
This dynamic, full-time Singer/Songwriter was a Nominee at the
7th Annual Golden Music Awards held in Nashville Tennessee in
no less than 5 categories.

Kerrigan hit #1 on the Worldwide Mainstream Charts for 10
consecutive weeks. Out of over 20,000 entries he stormed up the
charts to the #1 position ahead of Garth Brooks, Alan Jackson,
Billy Ray Cyrus, Jo Dee Messina, LeAnne Rimes & The Dixie Chicks.

Kerrigan was the first Australian Artist to make #1.

Countrycity Unity was a Top Ten hit on the Australian Charts
and when released in USA and Canada it secured a Top 3 berth.

To accommodate his amazing International acclaim, Kerrigan
released a 2nd single, 'Holding On', on the Stardust
Enterprises Label in Nashville.

His single 'Countrycity Unity' produced by Sherbet member
Garth Porter received International recognition. Released in
Europe it made the Top 10 on the European Top 40 Singles
Chart AS WELL AS The European Most Played Artist Chart.

Kerrigan also reached #1 on the Belgium Charts and made the
Top 10 in other European Countries.
For more information on his Chart Success click

or on the Music Page above.

The focus of outstanding comments from the Worldwide media,
Kerrigan was interviewed by Australian Magazine 'Aussie Post'
which publicised his (quote) 'legendary live performances' and
was also featured in Europe's Leading Magazine 'Country Music
Round-Up'.

His self-penned songs 'Together Tonight' and 'Feel So Blue'
confirmed his staying power as a force to be reckoned with on
the Australian Music Scene.

This human dynamo sets Tamworth of fire, his demand once
escalating to a staggering 52 performances. During the Annual
Cavalcade in Tamworth Kerrigan took out the Best Float Award
for 3 years in a row with Roy the Tree Man. He remains a consistant
crowd favourite at the Festival, continuously selling out of
merchandise.

Kerrigan has an intriguing history. An ancestry Journalists and
Magazines find alluring. Of Dutch/English descent with an
Irish/French name, with Spanish blood, born on the Tropical Island
Paradise of Ceylon now known as Sri Lanka, raised with Country and
Rock 'N' Roll music in his veins and now a fair-dinkum Aussie,
Kerrigan is presently riding the crest of a wave of popularity.

His fiery passion for entertaining radiates through his performances
as Kerrymania sweeps across the world. He and his Kez-Crew always
make their mark at Clubs, Concerts, Functions, Tours & Festivals.

The Overseas market has embraced Kerrigan with a passion and
included him on the same play lists as Garth Brooks, Shania Twain,
Alan Jackson, Dwight Yoakam, Johnny Cash and Faith Hill.

More than a Singer/Sonwriter, Kerrigan is an
Entertainer Extraordinaire.
Blessed with 'heartbreaker' good looks and a 21st century crack
voice, he is young and fresh - friendly and natural. His
charming personality, incredible energy and unassuming attitude
accompanied by an electrifying stage presentation, establishes a
Worldwide recipe for success.

Kerrigan has an aura about him - an appeal that charms all ages.
Men and women, both young and old, succumb to his appeal,
teenagers go wild watching his stage performances and incredibly
enough he appeals to children as well - everyone is attractd to his
sincerity and simplicitiy.

"That's what touches me the most," Kerrigan admits. "The little
kids showing their appreciation because children are openly
honest and what they say is from the heart. So if they like you
then you're definitely doing something right."

Kerrigan received National Television exposure with his song
'The Miracle Of Katie-Tara Murphy', a song he wrote for a little
girl diagnosed with Meningococcal.

Kerrigan heard of Katie-Tara Murphy, a little girl with from
Meningococcal, and his heart reached out to her. The song he
wrote for her was seen on Television right around Australia.
Kerrigan and manager Allan Feeley made two trips to Sydney
to meet the childs parents and perform the song.

Kerrigan's name goes down in history as a founding ingredient
in the Meningococcal foundation which has just been launched
in Australia. His song "The Miracle of Katie-Tara Murphy" brings
a tear to the dryest eye and won him another Award.

Another fan close to his heart was Kylie - she was stricken with
Huntington's. Fighting back tears Kerrigan performed his
birthday dedication to her on her birthday, a song he wrote titled
'My Beautiful Kylie' - a tear-jerker straight from the magnanimous
heart of this caring human being.

That musical challenge was a drop in the ocean compared to when
he was asked to sing the same song, soon after, at Kylie's funeral,
before her open casket, with a photograph of Kerrigan on her chest.

His charity performances include the Merv Lowry
Memorial Benefit For Kids With Cancer.

Kerrigan continues to tour the continent, both major and smaller
communities. His debut tour of New Zealand was a huge success and
return bookings were organised immediately.
For more information on his Touring click

or on the Tours & Live Appearance Page above.

He returned to the beautiful country of New Zealand in April/May
2003. His world tour during June/July 2003 was a staggering
success taking in Europe, South America, the USA and Canada.

Featured frequently in the press he appeared on Television's
New Faces and Hey Hey It's Saturday, even contesting on The Price
Is Right. He also appeared on Channel 7's 'Denise Show'.

When featured on TV's Pot Of Gold Kerrigan won his heat
when the audience voted him their favourite. In the finals
he won the heart of the 'People's Judge' getting the highest
score but missed out on sweeping the competition by a single
point from. Kerrigan performed 'Achy Breaky heart'.

Kerrigan has performed on Radio & Television Internationally
and appeared 'Live' in Nashville Tennessee, Bangkok Thailand,
all over Australia and Sri Lanka and over 19 countries around
the world.

or on the Television Page above.

He nearly clinched a recording contract with Marty Robins
Enterprises in Nashville with a song he wrote for his Mum's
birthday when he couldn't afford to buy her a present, aptly
titled 'Mother My Darling.' He went one step further to what
most artists have done and recorded a duet with his Mum on his
debut album - the song is titled 'Long Long Way'.

Another song sung in Nashville and also off his debut album
is the self-penned 'Thank You Lord,' written at a time when
Kerrigan says he was at his lowest ebb.
"When you feel so down and you can still thank the Lord
then that's pretty special," smiles Kerrigan.

Featured as Man of The Month in Australia's Women's Day Magazine,
letters poured in from thousands of hopeful females.

Kerrigan was brought up with country music in his veins.
His mum Jeune and dad Paul would gather the family around and
sing along to the strum of a battered guitar, mostly hymns
and country gospel and other favourites. Kerrigan's first public performance was at the age of 5 singing the old Jim Reeves classic 'But You Love Me Daddy' with his dad.

Says Kerrigan..."I could never comprehend how I could have
possibly felt so proud when dad sang
'your five year old face is a dirty disgrace'
and I chimed in with
'but you love me daddy'.
Obviously 'self-respect' was a zero factor as a kid."

This versatile, multi-talented yongster is an engaging author.
One of his early stories was 'Somersault To Adventure'.
For more information on his Writing expertise click

or on the Author Page above.

He has also been involved in Acting, both on Stage and on Video.
Despite a leading role as Apostle Peter in the rock opera 'Jesus
Christ Superstar' which broke box-office records in Gippsland,
Kerrigan's passion lies in his Music - singing and song writing.

He opted against performing in "Les Mis" due to his highly
demanding musical committments.

or on the Acting Page above.

A staunch Christian, Kerrigan Produced, Directed, Choreographed
and played the lead role in his Original Musical Drama 'A
Christmas To Remember' - a mammoth effort and another
successful achievement.

His annual concerts in his hometown have become something folk
eagerly look forward to and usually draws a sell-out crowd
including fans from interstate.

Kerrigan hails from a family of five and is the youngest
of 3 boys. He is much loved by his adoring neices and
nephews and often plays the Family 'Santa Claus' at
Christmastime.

He loves children and ardently looked forward to having his own
someday, but was waiting patiently for Ms. Right, firmly
believing Everything will happen at the right time - in
Gods time. And happen it did!!!!

Kerrigan proposed to his fiancee Michelle on May 16th 2007 and
the couple were married 3 months and a day later on August 17th.
Mr. & Mrs. La-Brooy remain happily married and romantically
renew their vows each year. The radiant couple plan to maintain
this tradition for the rest of their lives.

Kerrigan always wanted 6 children and the following year on December 17th 2013
his 6th child and 4th son Jerusalem La-Brooy was born. Six children under 6
is a record-breaking feat and the La-Brooy's are ecstatic.
Michelle will have more children for her handsome hubby in a heartbeat but since
it's Kerrigan that does all the work once they're born 24/7, (nappy changes, feeding,
staying up at night, EVERYTHING) she's happy to make it his call. To which Kerrigan
mischievously replies, "Don't tempt me!"

For more information on his personal life click
the following links.