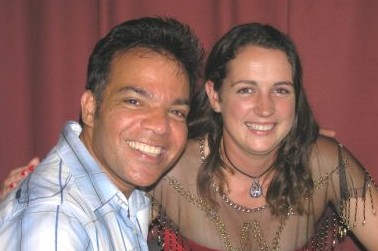 AUGUST 1ST 2007
Engaged couple Kerrigan & Michelle are living life in the
fast lane. They confirmed rumours of a Wedding as early as
this year, with a date initially set for December 1st.
However in a surprise decision the couple are rumoured to have
brought the date forward......considerably!!

Getting married is something they're both looking forward to,
with plans already hectically underway and the Happy Date set
for September 28th 2007. Kerrigan and Michelle are both ecstatic
and friends and family close to the couple confirm they have never
seen them look happier.

Michelle has obviously done something which no other girl has
managed to do - she's super-special in more ways than one.
Kerrigan always knew he would get to the alter oneday, someday,
at the right time - and he is convinced that time is right now -
with Michelle!

MAY 4TH 2007
Latest developments in the romance of Kerrigan and Michelle
are looking good. Michelle was due to fly back into Kerrigan's
arms on May 17th but in a surprise decision she caught the
flight back on May 3rd, 14 days earlier. Kerrigan, needless
to say, was over the moon.

The first person he broke the news to was son/nephew Damon and
the two of them drove to the airport on that rainy evening after
school, determined not to be late. They weren't - and Kerrigan &
Michelle were re-united by 6.20 pm, together in what they
consider to be 'forever.'

Damon anxiously asked Kerrigan whether he would still be a Dad
to him and Kerrigan was cautious to reassure the boy that he would
never neglect him and that he would always be his Dad for as long
as he wanted him to, no matter what the future held.

Kerrigan & Michelle are thrilled they cut out those 14 extra sleeps
away from each other. That special announcement could be anyday
now according to speculations as the long awaited proposal draws
nearer with Kerrigan reportedly looking at rings.

APRIL 20TH 2007
Kerrigan and Michelle were reunited on the 9th of April.
Friends and family who saw the couple together were most
impressed and say it's clear the couple are very much in
love.

Michelle left the shores of Australia on April 20th after
11 blissful days together. The parting is tough on both
of them. But there's good news. The pair had initially planned
to get-together in June but their time together has brought the
reunion forward. Now Michelle will move to Australia permanently
in May this year to be with Kerrigan. The couple are jubilant.

Their 11 days together were filled with love and contentment.
They were seen at waterfalls, parks and dining romantically at
the Crown Conservatory - an elegant dining experience.
Not wanting to neglect Damon or in anyway let him feel abandoned,
given the childs craving for a father-figure in his life and
considering Kerrigan his Dad, Kerrigan ensured the child was
always included.

As to when the special day is, if indeed there is to be one,
only time will tell and even those closest to the couple don't
know yet. Kerrigan is reportedly waiting for the right moment
to pop the question. In typical fashion he wants it to be perfect
and the most memorable moment in his sweetheart's life.

More pics of the couple can be viewed at the link below. One
courtesy of Jenny once again.

Kerrigan was featured in the local press on April 19th regarding
his much anticipated children's picture book.

MARCH 20TH 2007
Speculations surrounding Kerrigan's special visit to Kaitaia
New Zealand at the end of February have proved to be true.

Kerrigan confirms that he is in a relationship and many see
this as the ultimate love of his life. The beautiful lady is
Michelle Rumble and the couple are very much in love.

Having first met 5 years ago they seem destined to be together.
Kerrigan's last visit to New Zealand was for Michelle's Birthday
Bash. The couple get together again in April this year back
in Australia.

Michelle is from New Zealand and will be moving to Australia.
The couple are remaining close lipped about future plans at
the moment. But everything appears positive and they both
look radiant and blissful.

Kerrigan had to fly Damon back to Sydney for the few days
he returned to New Zealand and the child reportedly hated being
apart from his 'Dad' Kerrigan and longed to be back with him again.
Kerrigan missed the kid too and they were happy to be reunited on
Kerrigan's return, with Damon flying in about an hour after Kerrigan
landed, and having been flown back to Sydney a few hours before
Kerrigan left for New Zealand, thanks to strategic planning.

Meanwhile Kerrigan is reportedly missing the love of his
life, Michelle, and can't stop talking about her and apparently
the feeling is mutual.

Sneak previews and pics of the happy couple are available on the
Kerrigan La-Brooy website exclusively.

Links To
go to