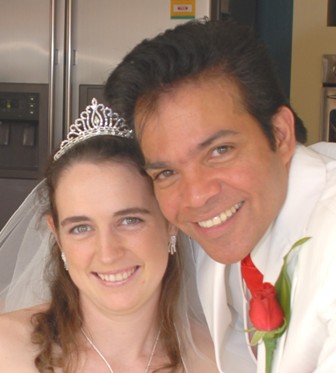 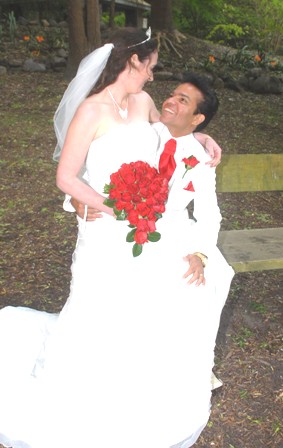 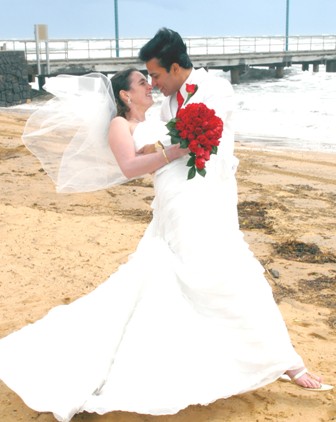 View the Pics of their 'Wedding Celebration'
as you scroll down and Read the Story .... If you want to go back
for more pics of the actual 'Marriage' which took place
a month prior in a Private Ceremony, follow the links
at the Bottom of the Page.

The Beautiful Bride....
Radiant & Pretty as a Picture.

Quite fittingly, the Fiarytale Love between Kerrigan & Michelle
culminated in a Fairytale Wedding.
Kerrigan and Michelle celebrated their Marriage in a
Fairytale Wedding Ceremony & Gala Reception, shared by
the couples Family and Closest Friends, on September 28th 2007.

Michelle looked radiant and refreshed and the prettiest Bride
Kerrigan had ever laid eyes on. She of course had eyes only for
him, her handsome Groom.

Rumour has it that Kerrigan was in actual fact going through a
personal trauma, worse than anything he had ever experienced before,
harassed by false allegations which were triggered by jealousy and
desperate attempts to destroy the couples happiness, but Family
and close friends congratulate and admire the couple for
overcoming their secret torment and for their strong determination
and absolute faith in God, that nothing and no one was going to
ruin their perfect day.

While the Bride & Her Ladies
Got Ready Upstairs....

Having Fun by the Looks of it

....The Groom & His Guys
Unwound Downstairs

On a day that boasted Weather typical of Melbourne, which
included Rain, Sunshine, Hail and Wind, the couple and
their fabulous Bridal-Party succeeded in conquering the
elements with lots of prayer and HEAPS of fun and laughter.

With Eyes Only For Each Other

In Their Lounge Room
Where they got Married

The Bride, Proving No Obstacle Is Too High....
Not even a Piano

The Groom, Proving a Kiss is Never Impossible

Surrounded by their Close Friends -
The Excited Bridal Party

Once Again with Eyes Only for Each Other

While posing for some Romantic Photographs on the Beach,
the smiling Groom helped his radiant Bride hold down her
veil but a strong gust of wind snapped it straight out of
her hand. Thankfully an involuntary grab by one of the
photographers brought about a timely rescue.

The Waves Trashed Playfully in the Background

Note the Brown Jacket against the Fence....
The Wind was so Strong, it held the jacket in place

And if that isn't Enough
See the Expressions on the Faces of the Loyal Octet....
CLASSIC!

The Ecstatic Couple on board the Titanic
Not Really, just the Love Boat

Proving Unequivocally that they don't Wear Wigs or Toupee's

Flanked by Chief Bridesmaid, Charmaine and Bestman Rahul,
and the two other Bridesmaid's Marianne & Leonie
and Groomsmen Allen & Dishan, Kerrigan & Michelle
posed for more photo's at the Berwick Botanical Gardens,
dodging the rain and running for cover when necessary.

Although The Bride & Groom mostly Ran 'TO' each Other

And Together Forever is How They'll Stay

Away from the Windy Seashore....

Lost in a Garden Paradise....

And Praying for the Sun to Shine

And Thank God It Did!

By a Shimmering Lake

Over-Eager for His Blushing Bride

Then back to their beautiful home for more photos with the
immediate Family before the Bridal car arrived to whisk them
away to church.

And Michelle, the Beautiful Rose between the Thorns

Kerrigan couldn't handle the thought of his precious Bride
travelling unaccompanied in the 1939 Mercedes Benz on the
somewhat long journey ahead, during peak-hour traffic on the
Eve of the Footy 'Grand Final' - neither could she!
So the couple travelled together, hand in
hand, side by side, reading through some of the heartfelt
wishes expressed in Wedding Cards given by faithful family
members, moments before they stepped into the car.

Arriving at the Church
Destiny Assembly of God
The Bride waited in the Car....

....While the Groom waited patiently inside
(Remembering to take his ring off at the last moment)
Pastor Graham Shand Married Them

The Bride Exiting The Car
Chauffeur in Attendance -
And Fittingly for Someone so Elegant....
....Walking the Red Carpet

The Ceremony was sentimental and romantic and in true
Kerrigan & Michelle fashion, it was totally different and
unique.

Walking up the Aisle

Even the Wedding March was unique. Kerrigan stood waiting as
the organ played 'Here Comes The Bride'
and Michelle walked down the aisle.
She was glowing and looked as pretty as a picture.
But once the Ivory-Clad couple met, the music changed to the
haunting theme of "A Summer Place".

They repeated their self-penned Vows looking into each
others eyes. Every member of the 120 plus guests present
were touched by the couples sincerity.

Two other special songs were "The Ceremony" by George Jones &
Tammy Wynette and the couples signature tune, "My Kind Of Woman,
My Kind Of Man" by Vince Gill & Patty Loveless, which was played
that Memorable Day on May 16th when Kerrigan got down on one knee
and proposed to Michelle aboard a Gondola on the Yarra River.
(Check out the Link to their Engagement at the Bottom of the Page.)

Kerrigan & Michelle
Singing the Above songs to each other

The two Hymns sung were "Voice That Breathed O'er Eden" & "How Great
Thou Art".

You May Kiss The Bride (Twice in 2 Months)
But Who's Counting?
"With Pleasure"

Mr. & Mrs. Kerrigan La-Brooy
Walking up the Aisle once the Ceremony was completed

Guests lined up at the Church Entrance to
wish the Happy Couple as the haunting sounds of Bagpipes played
outside the Church.

Camera's went off at all angles, many guests having travelled far
and wide to be there. Some as much as 24 hours. The guest list
included the Mayor, Minister of Parliament, about 7 Pastors
and Councillors from the Casey Shire.

One couple who travelled a great distance were Anne & Royden
Brown, friends of the couple through the internet, expressing an
awesome gesture of True Friendship.

All those who couldn't be there expressed their Support
& Encouragement and sent their Congratulations &
Best Wishes via Cards, Emails and over the Telephone from
Canada, the USA, New Zealand, Sri Lanka, England and across
Australia.

Kerrigan & Michelle were ecstatic and thankful to all those
who cared enough to be there, to support them on the greatest
day of their Lives. And to anyone who chose not to; well the
couple were determined not to let it ruin their happiness, nor
the precious memories their Marriage was destined to bring.

Kerrigan's cousin Sharon
whose Enthusiastic Husband Adrian clicked this one

The couple then made their way in the 1939 Benz to the
Reception Centre where another photo-session awaited them.

Totally Innocent but....
What's-A-Happening with that Horse-Shoe?

Keeping Each Other Warm

Who Needs A Chauffeur
Let's Drive this thing Ourselves

What followed was a Spectacular Evening of fun and
Entertainment enjoyed by all.

Kerrigan's Mum Jeune and his brother Kevin were introduced and
then it was time for the three couples of the Bridal Party to
make their entrance. Kerrigan's sister Junette was also
present and eldest brother Leon had made a special visit
to wish the couple minutes prior to them leaving their home for
the church.

Finally the Bridal Couple were introduced, greeted by loud Applause
and a sea of smiling faces as their signature tune "My Kind Of
Woman" played in the background.

They cut the Ribbon....
....Overcoming a minor glitch, pointed out by Michelle and hardly
concealed by Kerrigan's contageous laughter....

And then they cut the Wedding Cake,
laughingly overcoming yet another minor glitch.

The cake was a magnificient 3-tier structure, made in the shape of
an Ivory Grand Piano, similar to the one in their home, often played
by Kerrigan and on which he writes some of his songs.

Now What Do We Do?

And then the Toast!

The colour scheme for the Evening was Gold & Ivory.
Everyone present claimed to have an awesome night, complimenting the
food, the sheer elegance surrounding them, the beautiful ambience and
most of all admiring the True Love expressed between the blushing Bride
and her smiling Groom, whose only disagreements are still questions of
"Who is Luckier than the other to have one another in their life and Who
loves each other more?".

Mr. & Mrs. Kerrigan La-Brooy
Another Blissful Moment
(Getting their arms Right this time, unlike at their Engagement)

Bestman Rahul opened the Speeches followed by Kerrigan who could
not help repeating the phrase "My Wife", having waited a long time
to be able to say it....in his own words..."A Very Long Time".

Then it was time for the Bride & Groom to open the dance floor
and they did so with style, to the tune of their favourite song,
'My Kind Of Woman, My Kind of Man',
seemingly floating on clouds, literally,
created by a special 'dry-ice/smoky' effect.

This was followed by another waltsz "Could I Have This Dance" when
everyone else joined them on the floor.

Kerrigan's Best Friend Damo (Damian Senn) rang live from
Sri Lanka and although that was a fantastic surprise
it was still not the highlight of the night.
Neither was it when Kerrigan serenaded his Bride.
..................................
The ultimate climax of the night was when 'Michelle' sang
to 'Kerrigan', taking his breath away as she sang "Good As Gold."

The Groom was sitting a few feet away from her, on his haunches,
admiring her through loving eyes. She in turn meant every word she
sang with love overflowing in her eyes. The couple couldn't tear
their gaze away from each other and just for a few moments were totally
oblivious to everybody else around them.

Although Kerrigan insists Michelle's Dedication was the Highlight
of the night, it was no ordinary moment when he sang "Falling In Love"
to his Bride and reached out and took her hand in his at the
appropriate time.

During the night guests were treated to a special screening of the
couples Engagement DVD of May 16th as well as a brief glimpse of their
private Marriage Ceremony which took place on August 17th.

After the lavish reception the couple were still not done.
Despite getting dressed by 10.30 in the morning they still had
lots of energy in store.....well perhaps not 'lots', but 'enough.'
They were whisked off to Parliament House in the city of Melbourne
for more photographs after Midnight.

And The Princess Kissed Her Frog....

But No Prince Appeared

But Michelle Begs To Differ
With A Vehemence Rarely Expressed....
Declaring a 'King' Appeared instead of a 'Prince'

On A Freezing Melbourne Night
Their Kisses Kept Them Warm

And of course their Triumphant Love

Enveloped by an Old World Charm

Different Shades of the Same Shot

Letting It All Sink In

The Bright Lights of the City Behind Them

Their Honeymoon was put on hold because of initial plans involving
Kerrigan's nephew Damon being in his care and with Kerrigan never
neglecting the child or shirking his responsibility onto anyone else.

The couple will celebrate an official Honeymoon soon but for now are
blissful and content and anticipating Christmas and some other wonderful
news which they hope to be sharing soon.

Click on the link below to
"Kerrigan & Michelle Marriage" for pics and details of their
Private Marriage Ceremony which took place a month earlier.